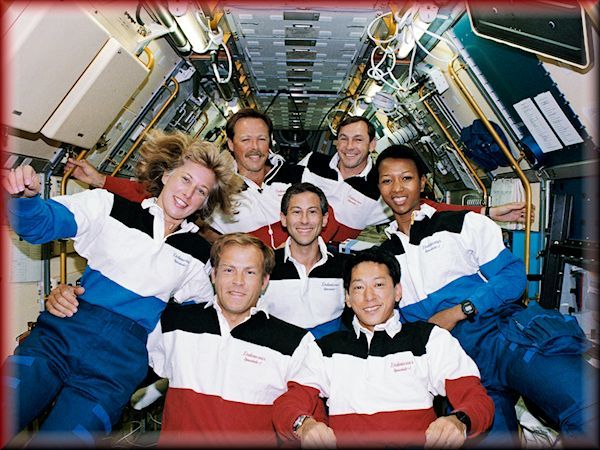 The Mission STS-47 all star crew

Curtis L. Brown, Jr, Pilot:  Selected as an astronaut candidate by NASA in June 1987, Brown completed a one-year training and evaluation program in August 1988, and is qualified for flight assignment as a pilot. Technical assignments have included: involvement in the upgrade of the Shuttle Mission Simulator (SMS); development of the Flight Data File (FDF); lead of the astronaut launch support team responsible for crew ingress/strap-in prior to launch and crew egress after landing; monitored the refurbishment of OV-102 and OV-103 during ground turnaround processing; lead spacecraft communicator (CAPCOM); Astronaut Office Lead of Shuttle Operations; Deputy Director, Flight Crew Operations Directorate. A veteran of six space flights, Brown has logged over 1,383 hours in space. He was the pilot on STS-47 in 1992, STS-66 in 1994 and STS-77 in 1996, and was spacecraft commander on STS-85 in 1997, STS-95 in 1998, and STS-103 in 1999. Brown retired from NASA to accept a position in the private sector.

Mark C. Lee, Payload Commander: Lee was selected as an astronaut candidate by NASA in May 1984. In June 1985, he completed a one-year training and evaluation program, qualifying him for assignment as a mission specialist on future Space Shuttle flight crews. His technical responsibilities within the Astronaut Office have included extravehicular activity (EVA), the inertial upper stage (IUS), Spacelab and Space Station systems. Lee has also served as a spacecraft communicator (CAPCOM) in the Mission Control Center, as Lead ''Cape Crusader'' at the Kennedy Space Center, Chief of Astronaut Appearances, Chief of the Astronaut Office Mission Development Branch, Chief of the EVA Robotics Branch, and Chief of the EVA Branch. He also worked Space Station assembly issues for the Astronaut Office.

A veteran of four space flights, Lee has traveled over 13 million miles going around the world 517 times and spending 33 days in orbit. Lee retired from NASA and the Air Force effective July 1, 2001.

N. Jan Davis, Mission Specialist: Dr. Davis became an astronaut in June 1987. Her initial technical assignment was in the Astronaut Office Mission Development Branch, where she provided technical support for Shuttle payloads. She then served as a CAPCOM in Mission Control communicating with Shuttle crews for seven missions. After her first space flight, Dr. Davis served as the Astronaut Office representative for the Remote Manipulator System (RMS), with responsibility for RMS operations, training, and payloads. After her second space flight, she served as the Chairperson of the NASA Education Working Group and as Chief for the Payloads Branch, which provided Astronaut Office support for all Shuttle and Space Station payloads. A veteran of three space flights, Dr. Davis has logged over 673 hours in space. She flew as a mission specialist on STS-47 in 1992 and STS-60 in 1994, and was the payload commander on STS-85 in 1997.

After her flight on STS-85, Dr. Davis was assigned to NASA Headquarters as the Director of the Human Exploration and Development of Space (HEDS), Independent Assurance Office for the Office of Safety and Mission Assurance. In July 1999, she transferred to MSFC as Director of the Flight Projects Directorate. In August 2003, she was named Director of Safety and Mission Assurance, with responsibility for the safety, reliability, and quality activities of all MSFC projects and personnel. In October 2005, Dr. Davis retired from NASA.

He was selected as an astronaut candidate by NASA in June 1985, and qualified as an astronaut in July 1986. Apt flew as a member of the crew of the space Shuttle Atlantis on the STS-37 mission. Dr. Apt was Endeavour’s flight engineer on the crew of STS-47, Spacelab-J. He flew again aboard Endeavour on STS-59, the first flight of the Space Radar Laboratory. Apt served aboard Atlantis during mission STS-79. With the completion of his fourth flight, Dr. Apt has logged over 847 hours (35 days) in space, including 10 hours and 49 minutes on two space walks. He has flown around the Earth 562 times. Dr. Apt left NASA in May 1997.

Mamoru Mohri, Payload Specialist: Selected by the National Space Development Agency of Japan (now referred to as the Japan Aerospace Exploration Agency, JAXA) in 1985, he flew aboard the Space Shuttle Endeavor on the STS-47 (Spacelab-J) mission in 1992. He was the first Japanese astronaut who performed Japan-US joint investigation in space. Dr. Mohri also conducted a "Space Classroom", which was broadcasted live to the children in Japan.

Dr. Mohri was qualified as NASA Mission Specialist (MS) in 1998 and flew for a second time aboard the Space Shuttle Endeavor on the STS-99 mission in 2000. During the mission, he mapped more than 47 million miles of the Earth's surface to develop a 3-D rendition of our planet. Also on the STS-99 mission, for the first time ever, he acquired earth observation data with a High-Definition Television (HDTV) Camera. 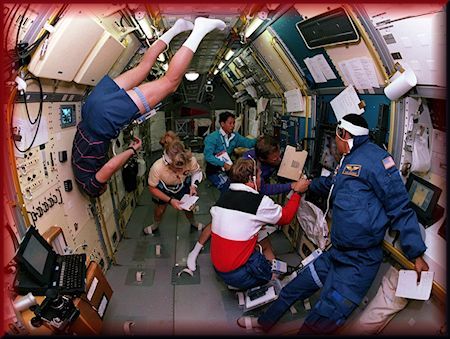 Spacelab-J was a joint NASA and National Space Development Agency of Japan (NASDA) mission utilizing a manned Spacelab module. The conducted microgravity investigations in materials and life sciences included 24 materials science and 20 life sciences experiments, of which 35 were sponsored by NASDA, 7 by NASA and two collaborative efforts.

Spacelab research offers unique opportunities to learn about basic scientific processes and the effects of space travel on humans in preparation for longer stays in space. These opportunities ultimately may lead to useful commercial and medical applications on Earth.

For Spacelab-J, the long module is used. This self-contained 23-foot-laboratory contains a series of equipment racks that hold furnaces, computer and biological workstations, biological incubators, storage lockers and other equipment to perform experiments in space. Additional storage space and experiments are located in the orbiter crew cabin's mid-deck area.

The goal of Geek History is to increase awareness, educate, and entertain. We are just trying to get you to think about the many amazing people that have contributed to the world of technology. Our goal in presenting this information on aviation and aerospace history is by no means meant to be any type of authoritative source on the topic. I am not a rocket scientist, nor is space craft or space exploration in my area of expertise, I hope by presenting this information you take the time to learn more.

Please refer to the links listed here to find the original photos for your own personal use and learn more on the topics covered.