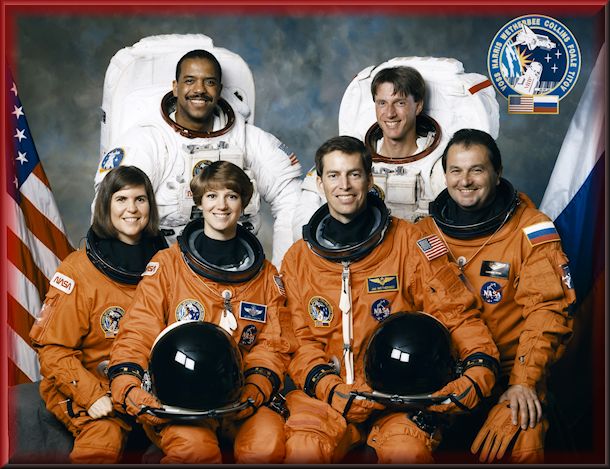 One of my definitions of a geek is someone who introduces us to brave new worlds with visions of the future. What better fits that definition of a geek than an astronaut.

As I explored a collection of NASA images I came across the STS-63 Crew Portrait. What immediately caught my attention about the STS-63 Crew Portrait was the diversity of the crew. An African American, two women, and a Cosmonaut were among the six crew members. I was gathering information to do an article for Geek History on women astronauts. As I learned about the crew members and mission of STS-63, I discovered a mission of many milestones and amazing crew members.

Many milestones for Mission STS-63

Mission STS-63 aboard Space Shuttle Discovery launched from Kennedy Space Center on February 3, 1995. The mission was also a symbol of international cooperation with a primary objective to perform a rendezvous and fly around the Russian space station Mir.

The Mission STS-63 all star crew

Pilot Eileen M. Collins: Selected by NASA in January 1990, Collins became an astronaut in July 1991. A veteran of four space flights, the first woman pilot of a Space Shuttle, Collins has logged over 872 hours in space. Collins retired from NASA in May 2006.

Mission Specialist Bernard Harris: Completed a residency in internal medicine at the Mayo Clinic in 1985. In addition, he completed a National Research Council Fellowship at NASA Ames Research Center in 1987, and trained as a flight surgeon at the Aerospace School of Medicine, Brooks Air Force Base, San Antonio, Texas, in 1988. Selected by NASA in January 1990, Harris became an astronaut in July 1991, and qualified for assignment as a mission specialist on future Space Shuttle flight crews. Harris was part of the payload crew of Spacelab D-2, the 14th flight of Shuttle Columbia, conducting a variety of research in physical and life sciences. Dr. Harris left NASA in April 1996.

Mission Specialist Janice E. Voss: Selected by NASA in January 1990, Dr. Voss became an astronaut in July 1991. Her technical assignments have included working Spacelab/Spacehab issues for the Astronaut Office Mission Development Branch and robotics issues for the Robotics Branch. From October 2004 to November 2007, she was assigned to the NASA Ames Research Center, where she served as the Science Director for the Kepler spacecraft.

Cosmonaut Vladmir G. Titov: A graduate of Yuri Gagarin Air Force Academy in 1987, selected to join the cosmonaut team in 1976. In addition to STS-63 Titov served on the crew of STS-86 Atlantis in 1997, NASAs seventh mission to rendezvous and dock with the Russian Space Station Mir. Vladimir Titov retired from the Air Force and the Russian Space Agency in 1998.

Proud to be a geek

I found a news article from July, 2012, about a visit by Bernard Harris, the first African American to walk in space, with middle school students on grounds at the University of Virginia. Harris told the students, "Guess what? Geeks run the world. I am a geek and it's ok to be a geek." Dr. Harris made the remarks at the ExxonMobil Bernard Harris Summer Science Camp (EMBHSSC), a two-week residential camp hosted at colleges and universities across the nation.

Like many people who grew up in the 1960s I grew up to be a geek because I was fascinated by the space program. I remember July 20, 1969, sitting in a dark living room late at night, lighted only by my parents old black and white television. I remember that fuzzy picture of an astronaut saluting the American Flag. I remember being there for the first Apollo moon landing every time I hear the audio of Neil Armstrong's first words, "That's one small step for man, one giant leap for mankind"

Another vivid memory from my past is linked to hearing a secretary shriek, as she turned up the radio for every one to hear. On the afternoon of January 28, 1986, the report of the space shuttle explosion killing seven astronauts sent a chill of strangeness throughout me, as if a friend of the family had just been killed. The visual picture of the explosion played on the TV news that night is one I will not forget. It is unfortunate that the memories that are most anchored in our minds are often ones which inspire the emotions of shock or sadness. Sadly the event I remember most about the Space Shuttle program is the explosion of Shuttle Challenger, killing all seven geeks hoping to introduce us to brave new worlds.

Perhaps the world became complacent about the Space Shuttle program because in the course of 135 missions flown over thirty years, the event became nothing special. Perhaps our world reminds us too much about the tragedies, rather than remember the successes of 132 missions, we focus on the losses of Challenger and Columbia.

Initially I had planned to have a few pages on legendary rocket man Wernher von Braun and the history of the space program on Geek History. This new personal discovery of Mission STS-63 has inspired me to add a section on astronauts and the space race to Geek History.