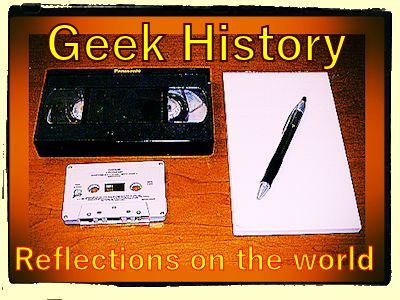 I started looking for some old computer software I had stored away, and a recent vacation day turned into a house cleaning day.

As I sort through many old boxes in storage I find old music and movies. The cassette tapes and the videos of the one of a kind personal stuff I saved, perhaps someday finding the time to transfer them to some digital media.

The tapes of popular music and movies hardly seem worth the effort to convert to digital, with online libraries and digital downloads, it is easy to find other sources of my magnetic tape treasures. I find myself tossing out all my home mixed music cassette tapes and old VHS video tapes of recorded television shows.

Going through a box of floppy disks and I found some pictures from an old digital camera that copied the pictures directly to floppy. I copied the photos from the floppies to a hard drive, and back them up as well to other media.

I started thinking about all that magnetic tape we don't use any more, the music tapes, VHS videos, and floppy disks. Magnetic tape has been replaced by a variety of digital tools that have much greater capacity and efficiency.

Magnetic tape is a made of a thin magnetizable coating on plastic. It was the basis for many forms of audio, video, and computer data storage. One of the biggest downsides to tape, other than finding a device that can read it in today's digital world, is magnetic tape can suffer from deterioration over the years much quicker than the modern digital tools that replace it.

Now that I have thrown away the majority of old audio cassettes and video tapes, my next project is to sort and scan several boxes of photos. There is also a few boxes of old cards and letters that may get converted to the digital world as well.

Reflections on the world

The majority of my writing is done in the computer version of notepad first, and then transferred to an application. I no longer use the physical version of a notepad. When I talk about using my notebook, I am talking about a small computer, not a book full of paper. I am far more likely to send an email, or use social media, to connect with a long lost friend, than I am to write a letter on paper.

As someone who loves to study the history and origins of technology, and society, I think about all the historic documents, letters from presidents to their wives sent from war zones, letters between political allies and adversaries in our museums..

There is so much history, not only in the words, but in the handwriting as well. It is sad that we no longer have scraps of paper to look at that have such historic significance. Somehow the transcripts of a text message just doesn't feel the same.

Over the last few years I have thrown away quite a bit of paper and magnetic tape. I guess this is all progress?