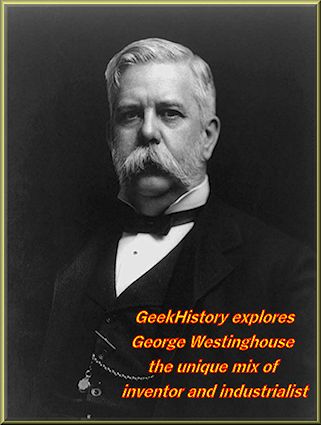 George Westinghouse was the son of a New York agricultural machinery maker, the owner of the G. Westinghouse and Company Schenectady Agricultural Works. As a boy George was not a good student, it is said he was bored in the classroom. He loved mechanics and working in the machine shops of his father's factory. A foreman in his father's shop took an interest in George junior and gave him the tools and encouragement to build water wheels and steam engines in his fathers shop. Later in life Westinghouse said the best education he had was the ability to work in his father's shops.

At an early age Westinghouse worked on various inventions involving rotary steam engines and improving the railway system, at age of 19 Westinghouse was awarded his first patent for a rotary steam engine. Westinghouse moved to Pittsburgh at the age of 21 in search of the steel he needed for his inventions in rail transportation. At age 22 he was awarded a patent for one of his most important inventions, the railroad air brake. This device enabled trains to be stopped with fail-safe accuracy by the locomotive engineer for the first time and was eventually adopted on the majority of the world's railroads. The Westinghouse Air Brake Company was founded on September 28, 1869 by George Westinghouse in Pittsburgh, Pennsylvania.

The War of Currents

Part of the Tesla mythology tells of how Tesla pitched the idea of AC power generation to Westinghouse. The concept of AC power distribution was not a new concept for Westinghouse, he was also an inventor in the gas industry. Working on the distribution of natural gas Westinghouse was awarded thirty-eight patents in that field. His knowledge of transferring gas over long distances had him thinking about ways to distribute electricity.

Westinghouse had a knack for spotting good ideas and people and bringing them into his fold, and he knew AC power distribution was a good idea. In 1885 Westinghouse became interested in the inventions of European Inventors Gaulard and Gibbs and purchased the American rights to their patents for AC current transformers. Westinghouse and his staff worked on improving and redesigning the transformers, and the Westinghouse Electric Company was started in 1886.

We will go into more detail on how George Westinghouse worked with Nikola Tesla to defeat Thomas Edison in the War of Currents in the article that follows this one.

The legacy of George Westinghouse

George Westinghouse, the son of a New York agricultural machinery maker, came to Pittsburgh in 1868 in search of steel for a new tool he designed to guide derailed train cars back onto the track. Before he left Pittsburgh to retire back to New York, Westinghouse gave the world safer rail transportation, steam turbines, gas lighting and heating, and brought electricity to the average American's home.

A monument in Pittsburgh honoring Westinghouse was paid for by employees of Westinghouse companies. The Dedication Plaque located on the back side of the Westinghouse Memorial starts with the following sentence, "This memorial unveiled October 6, 1930, in honor of George Westinghouse is an enduring testimonial to the esteem, affection and loyalty of 60,000 employees of the great industrial organizations of which he was the founder."

The first major inventions of George Westinghouse were in the areas of railroad safety, specifically railroad air brakes. The Westinghouse Air Brake Company (WABCO) was founded on September 28, 1869 by George Westinghouse. WABCO's direct successor companies include WABCO Vehicle Control Systems, a commercial vehicle air brake manufacturer; and Wabtec, a railway equipment manufacturer, which have been owned and operated independently of each other since the mid-twentieth century.

The legacy of Westinghouse patents

The famous line of comedian Rodney Dangerfield was "I get no respect." As so much written on the Internet about the infamous "War of Currents" being between Edison and Tesla, I think that same "I get no respect" tag line could be used to describe George Westinghouse.


If someday they say of me that in my work I have contributed something to the welfare and happiness of my fellow man, I shall be satisfied.  -- George Westinghouse