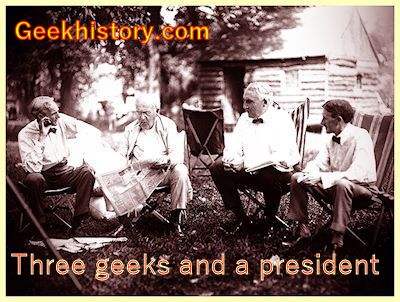 Much like a "guru" is a spiritual leader and teacher, a geek is a technology leader and teacher. Geeks introduce us to brave new worlds, with visions of the future. Geeks pick up where others left off, to turn a vision into a reality. Geeks take concepts and turn them into functional products. Many of the early pioneers of the internet illustrate that geeks often develop new ideas for the "love of the game," without seeking fame or fortune.

Three geeks and a president

The 1921 photo attached to this article shows three famous geeks, Henry Ford, Thomas Edison, and Harvey Firestone, along with Warren G. Harding, the 29th President of the USA. The three famous geeks were leaders in American industry in the early 20th century, and often worked and vacationed together. Ford, Edison, and Firestone, along with American naturalist John Burroughs, embarked on a series of summer camping trips calling themselves the Four Vagabonds.

Harvey Firestone was the founder of the Firestone Tire and Rubber Company, one of the first global makers of automobile tires.

Thomas Edison is considered one of the most prolific inventors in history, holding over 1000 U.S. patents in his name. He is credited with numerous inventions that contributed to mass communication and, in particular, telecommunications.

In 1927 Edison joined with Ford and Firestone to establish the Edison Botanic Research Corporation to develop rubber at his winter home in Fort Myers, Florida.