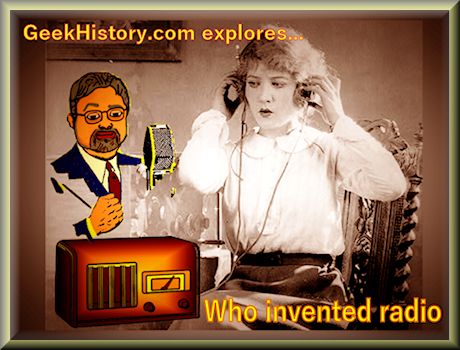 Answering the question of "who invented radio" is another example of the complexities of defining inventors of inventions. There is no one "eureka" moment where a lone inventor in a lab created something totally new that changed everything.  Radio was an ongoing evolution of an idea over time. It is not as simple as picking out a single individual, or even a single point in time, that was the turning point in the creation of radio.

I started my career in technology in the 1970s working on military communications and citizens band radios. As I studied technology I remember Guglielmo Marconi was often mentioned as the "father of radio." Over time I have come to realize that Marconi is one of many contributions to the technology of radio.

What makes that task even more difficult with radio is that the term itself does not define a simple single item.

The concept of radio continues to evolve. In the early half of the 21st century the term wireless could be used to describe a short-range computer networking system, with technologies such as Wireless Local Area Network (WLAN), Wi-Fi, and Bluetooth. The term wireless is also applied to a mobile telephone system.

The concept of radio started as  the transmission of telegraph messages without connecting wires.  The etymology of "radio" or "radiotelegraphy" reveals that it was called "wireless telegraphy" which was later shortened to "wireless."

Michael Faraday is best known for his work regarding electricity and magnetism. Faraday began his great series of experiments in 1831 on the concepts of electromagnetic induction.

Heinrich Rudolf Hertz conduct a series of experiments between 1886 and 1889 that validated Maxwell's theory.  The unit of frequency, cycle per second, was named the "hertz" in his honor.